NO!  Not Compared to the Alternatives

This video is from WPVI-TV Action News in Philadelphia, PA

This video shows a home being blown to bits by a natural gas explosion caused by a leaking gas main. This would never happen to a home powered by emission free electricity generated at a safe nuclear power located plant hundreds of miles away.

We included this video to illustrate how Americans routinely accept death and destruction from exploding pipelines and rail tank cars yet continue to fear nuclear power.

Like everything, nuclear power has its dangers, but for years nuclear power opponents have been exaggerating or just lying about them. Before we debunk some of the statements about the dangers, we need to compare nuclear power’s dangers with those of other power sources. Just this April 2013, NASA published the research paper, Coal and Gas are Far More Harmful than Nuclear Power, by Pushker Kharecha and James Hansen.

This quote from their paper says its all.

“Using historical electricity production data and mortality and emission factors from the peer-reviewed scientific literature, we found that despite the three major nuclear accidents the world has experienced, nuclear power prevented an average of over 1.8 million net deaths worldwide between 1971-2009. This amounts to at least hundreds and more likely thousands of times more deaths than it caused.”  Emphasis ours.

To read the whole report click Coal and Gas are Far More Harmful than Nuclear Power.

The facts just don’t match the antinuclear propaganda. For example, compare the number of deaths caused by American commercial nuclear power since the first commercial reactor at Shippingport started in 1957, (0, zero, none, nada, zilch) with the 47 innocent people incinerated in the tanker train accident in Lac-Méganatic, Quebec just this July 19, 2013. This is only two less that the world wide total of 49 deaths from Chernobyl. Wikipedia on the Lac-Méganatic derailment.

Dozens of Americans die in fossil fuel accidents each year. Here are five that made the news.

The above examples illustrate that many fossil fuel mishaps kill innocent civilians. Remember, the 49 people who died at Chernobyl were plant operators and first responders. With a nuclear plant, even when an unthinkable failure happens, the safety and containment systems give the public a chance to get away to safety. If you are the type that might get into a discussion with a nuclear energy opponent, print out the above examples then ask them to name any civilian killed in a nuclear power mishap.

The article Human Cost of Energy, in the September 2011 issue of Scientific American, documents the accident death rates for each type of energy production. It’s graphic illustrates that the production of energy with coal, oil, or gas is over ten times as deadly as the production of energy from any other source including nuclear. The HCE Graphic also illustrates the health burden on the United States caused by particulates from fossil-fueled power plants. These particulates cause about 30,100 Americans to die prematurely as well as cause workers to miss over five million days of work each year.

What about Three Mile Island, Chernobyl, and Fukushima?

All three of these accidents were disasters to their owners. Chernobyl and Fukushima also irradiated the land around the plants. To this date only Chernobyl has killed anyone, Only 49 deaths have been documented not the thousands fear mongers state.More on Chernobyl Deaths

Two plant operators were killed almost immediately. Additional workers died from acute radiation syndrome (ARS). The Expert Group report states: “Among the 134 emergency workers involved in the immediate mitigation of the Chernobyl accident, severely exposed workers and fireman during the first days, 28 persons died in 1986 due to ARS, and 19 more persons died in 1987-2004 from different causes. Among the general population affected by the Chernobyl radioactive fallout, the much lower exposures meant that ARS cases did not occur.”

The Three Mile Island (TMI) meltdown totaled the reactor section of the plant and emitted a small harmless amount of radiation into the air and nearby river. However, it did prove that if the “impossible” event of a reactor meltdown happens, the containment system would hold.

We detailed these three reactor accidents in our page on Plant Meltdowns. We have linked you up to extensive documentation on what happened, what we learned from it, and how we can prevent a reoccurrence in the future.

Hanford probably contains the greatest amount of radioactive waste anywhere in the world. Let’s use this to our advantage. We can construct new power plants with their reactors underground at locations where they can be decommissioned in place. If some unforeseen accident causes a meltdown, the reactor can just be left there. Likewise, when reactors reach the end of their useful life, their silo can be filled with sand or water and monitored for the next few milieu.

If you think that we should not bury decommissioned reactors at Hanford, inspect the aerial photo below. Taken in 2008 is shows some 114 de-fueled reactor sections of decommissioned Nuclear Submarines. (Burke became aware of this site as he viewed it from his Hanford tour bus.)

Remember the Trojan Nuclear Power Plant in Prescott, Oregon. We Washingtonians remember it by its large cooling tower visible across the Columbia River as we drove to Portland. The Trojan Plant was shut down in January 1993.  Most of the plant site was decommissioned between February 2001 and December 2004. The reactor pressure vessel was shipped (intact and but wrapped in concrete foam) to Hanford for burial in 2005. The cooling tower was demolished by dynamite implosion in May 2006. The 780 SNF (spent nuclear fuel) assemblies (359 metric tons) from Trojan Plant were transferred to an on-site ISFSI (independent spent fuel storage installation) between 2002 and 2003. 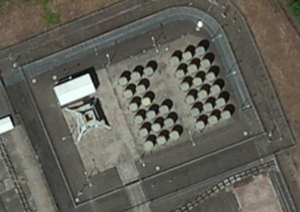 This photo shows the Trojan Plant’s spent fuel stored in 34 dry storage casks. The ISFSI consists of a concrete pad about 200 feet square surrounded by two security fences. Storage of spent fuel on site is risky, but storing it on the site of a fully decommissioned reactor is just stupid. These storage casks should be moved to Hanford ASAP. ENWFor the moment, most of the spent fuel rods are being stored in dry casks. Some casks are stored in places like Hanford, but most are stored at the site that generated the waste. This interim storage solution was a result of the Federal Government’s failure to establish a permanent storage site. However, this failure was fortuitous as the nuclear industry had planned to permanently dispose of spent fuel rods without reprocessing them to remove the unused fissionable materials. This is analogous to sending a junk car to be crushed with a tank half full of gas. We need to be sure that all the current waste is safely contained, recycled, and processed for permanent storage.

Thanks for allaying my fears. Let’s Start Energizing.

One thought on “Is Nuclear Power Dangerous?”